As hurricane season swirls in, and serves as a haunting reminder of Katrina, we check in with Louisiana's Department of Public Safety and Corrections about lessons learned from the great storm of 2005 and how they're still recovering from the devastating forces of one of the deadliest hurricanes New Orleans, and our nation, has ever seen.
Jim

Backed up on the bayou 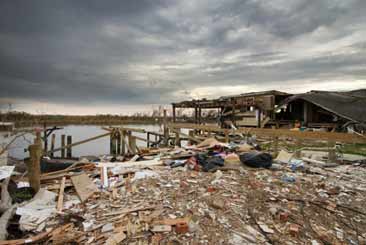 Last week, Americans everywhere paused to remember Hurricane Katrina, one of the deadliest and costliest hurricanes in the history of the United States. During the storm and aftermath, while much of the national media focused on the atrocities at the Louisiana Superdome and FEMA’s response to the disaster, the Louisiana Department of Public Safety and Corrections was in the midst of evacuating more than 7,600 inmates and assisting with civilian evacuations.

Two years later, LDPSC remains at the ready for another hurricane or disaster, even though they are still performing repairs on facilities impacted by Katrina.

“Since Katrina, we’ve had two facilities with significant damage that are still in recovery,” says LDPSC director of facility services Bill Breland. More

Regarding Waiting for the “SHU” to drop, 8/26/07
I've been an NYS CO for more than eight years and I have seen many inmates seriously misbehave and interrupt the daily operations of a whole entire correctional facility. If these inmates are indeed mentally ill they should not be in a general confinement facility. Mentally ill inmates pose a serious threat to the safety of staff and fellow inmates alike. Their unstable behavior makes a dangerous place all that more dangerous. If the state cannot confine them for the safety of all others involved, tell me what can be done.
James Fitzpatrick

Regarding Crossing the Line, 8/26/07
I have worked as a CO in a small (population between 120-130 inmates) county jail for 18 years. Over the years there have been more incidents involving inappropriate inmate-officer activity with female officers, but the female officers have always been allowed to resign due to a lack of evidence. The incidents involving male officer-inmate activity resulted in prosecution. I don’t know if this happens in other facilities but this would definitely skew the statistics.
Rinda Ueckert, Hall County, Nebraska

I think this was an excellent article. It would be great to see more specific training for all DOC staff regarding such concerns - especially staff that are deemed most vulnerable to such situations.
Kathleen Bierke, Institution Complaint Examiner, Green Bay Correctional Institution

According to a Bureau of Justice Statistics report released this month, correctional authorities reported more than 6,000 allegations of sexual violence involving inmates in prisons and jails during 2006. More

he legal landscape for defense lawyers with pending capital cases has grown increasingly challenging to navigate. Defending an inmate on death row could become even more daunting as legislators examine a “fast-tracking” that could take years off the time death row inmates have to appeal their case. More

I can remember back in the early 1990s when I was a rookie police cadet going through the academy. At that time everything we did in training was because of officer survival and obtaining the street survival mindset so that we would not become a statistic on a wall somewhere. More

Med 101 Allows Medical Staff To Buy Direct and Save 40%

Last December Med101store.com opened its doors and began selling disposable medical supplies direct from the warehouse, an unprecedented move that promises to impact the way medical supplies are purchased in this country. More

Date: 9/10 - 9/13/07
Each year at its annual conference the WCWSA provides training opportunities with a variety of correctional professional and experts in the fields of law enforcement, technology, law and other topics of interest. More

Date: 9/10 - 0/14/07
This training will provide the participant the knowledge of proper planning methods and techniques for conducting a successful foot, vehicle and stationary surveillance operation in an urban setting. More

"The secret of happiness is to make others believe they are the cause of it."
- Al Batt, writer, speaker, storyteller and humorist